Day 4: Riding Around in Circles (On a Train)

The threat of rain has been ongoing during our time in Yangon. We spent much of the day just waiting for the forcasted rain to come, but luckily it waited until later in the day to actually appear.

Today we spent more time walking around than any other. Partially because we wanted to see more of the city and partially because we had some trouble finding some of the places we were looking for. It has become clear that Google Maps is a tad spotty for this area, which is understandable, as I highly doubt that map accuracy in Myanmar is their highest priority. Regardless, it has been good enough most of the time.

Amidst the confusion we actually ran into an amazing area called People’s Square and Park. 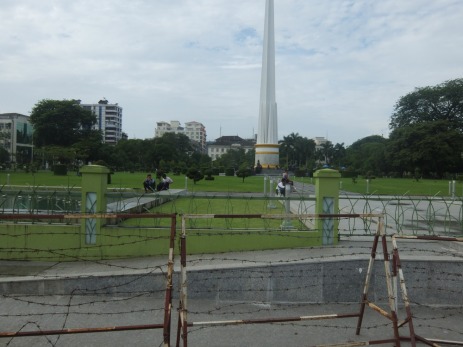 This was actually one of the nicest, well maintained parts of the city we could find. You could tell that a lot of pride is taken in maintaining this outdoor area, which appears to be one of the few parts of the city where anti-litering laws are not only present but strictly enforced. The park was filled with all sorts of locals relaxing, walking, and even using some of the stationary exercise equipment. One man in general was pulling off some headstands that woud make the people at my crossfit box jealous.

Afterward we headed out to locate a local handmade craft space called Pomelo. It was a nice little slice of local artists selling their very unique goods. Lots of hand woven dolls, carved woodwork, and recycled jewelry. It was on par with what I would expect to find in NYC at a small popup shop. Pretty cool to see people practicing craft here as well.

We finally made our way to the Circular Train later on in the afternoon. It was quite the journey. For background’s sake, the circular train is a 50km train that acts as the main commuter way for people to get into and out of the city proper. It has 3 classes of cars, from ordinary up to first class and is filled with people of all sorts. The train takes about 3 hours to complete its full journey around the city and travels quite slow. It stops at a wide array of places, from small train stations, to slabs of cement seeminly in the middle of no where. 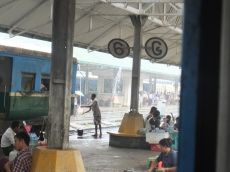 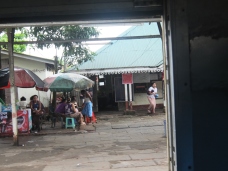 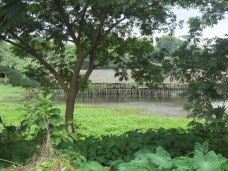 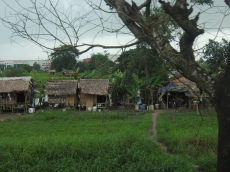 On the train, you pass by probably the closest approximation of every day life here and it is in a word, humbling. I’m not sure it really hit me for the first two hours that we were on the train, but by the last hour the gravity of how people live here really hit me. These people truly have nothing. We saw people working in rice patties, small “villages” where the structure seemed to be made from old found tarps and wood. Burned out structures, with cloth over the windows to help keep the elements out. Then 500 feet away we’d see large houses with satalite dishes, that while weather worn like much of what is here, looked immaculate. While we also saw markets along the way, full of people that were happy and selling their goods (mostly fruit and bread), it is hard to grasp the disparity in how people live here. While I wouldn’t describe very many people here as rich, in the way that I’d see in New York, there is a vast difference in how some people here live.

I’m honestly not sure I was full prepared to see this. I’m grateful for the experience, and I think it will definitely shape my understanding of what people actually go through in other places. Not only that, but that they actually still maintain happy lives regardless.

Drew Butler I'm a father and web developer who is currently traveling the world with my family and seeking new adventures. In the wee hours, I'm also working on developing new things.
Published July 31, 2014January 21, 2016