Day 10: A Tour To Remember (or the day we thought we died)

A day late and a dollar short, but here’s our journey on day 10.

We started the day expecting to be taking a full day tour or the various adjacent islands. Seeing everything from sharks, to plankton, to the beach from The Beach. Of course this meant getting up at an obscene hour, which if you know Lauren means getting up at a normal hour, but for the rest of us, it is just a tad too early, especially while on vacation.

Luckily for the hero of this story, when Lauren got up and read her email, she discovered that the morning portion of the tour was canceled due to weather and that we could pickup with the second half in the afternoon. Yay! So I got to sleep in after all.

Fast forward to the afternoon, I’m already sunburned on my back due to poor application of sun block, we’re in Phi Phi Town, and our tour is assembling on several long boats to go out into the islands.

No, don’t get me wrong, in theory this sounds great, and while Lauren signed us up for this optional event, I never had any intention of doing this. Lauren on the other hand was on the fence up until the last moment, when she decided it wasn’t something she wanted to do. It got so close, that she started putting on the water/climbing shoes saying, “this is for Caitlin,” before watching the first guy jump in the water and saying, “nope, never mind.” Smart choice. Though, it did look like everyone who did it had fun.

Anyway, this wasn’t even the most dangerous part of the tour.

Next up, monkey beach.

Did you bring me a monkey? Not this time. We stopped by what everyone on the boat kept calling monkey island, which is actually just a beach. A very dirty beach. Full of all sorts of trash left by tourists who were likely trying to get the monkeys to play with, so they could take pictures. Now it is just covered in all of it.

That aside, the monkeys were pretty cool. Watching them play with each other and run up to people who had food was pretty neat. As Lauren put it, it is hard to deny evolution when you can see how close to human these creatures act. I agree. Definitely not foolproof evidence, but a pretty solid observation nonetheless. There were a few pictures I took where you could almost see the humanity in their eyes. Pretty crazy stuff to see up close and personal.

Next, snorkeling with the fishes.

Lauren of course donned her mask and jumped right in. I however quivering in my boots, held back momentarily and had a small panic attack thinking about how sharks were going to get me. And don’t forget the octopi. And the manta ray!

After much goading though, I finally climbed through the window, and took the plunge myself. The reality is much tamer than what the imagination can lead you to believe. Even though I spent a good 5-minutes looking all around for sharks to come attack me, what was really there were bright, colorful fish that you’d only normally see in an aquarium, along with coral all along the bottom. All in all, it was pretty spectacular and I’m glad I jumped in.

A quick dip in a lagoon

A little further in, we stopped once again. Not for snorkeling, but just to swim a little bit. This time, there was no bottom you could really see, as from what one person said, it was about 15 meters deep. Or, in American terms, about 50 feet. Oh crap! There really could be all sorts of crap down there!

Of course Lauren dove in with no hesitation. I waited a few minutes, watching her swim away from the boat and eventually start teach a kid how to swim a little (no joke), before I decided I had come this far, I couldn’t turn back now. So I jumped in too.

For me this was probably the least eventful of all the stops, but to hear Lauren tell it, it was one of the best. Maybe she’ll tell us more on that later.

Next up, Maya Bay and The Beach

This is where the story gets fun. Maya Bay is quite beautiful, but on this day, the waves were too strong for the boats to go to The Beach, so we had to take a back route. This route consisted of a stone wall, with a rope ladder and dozens of people climbing up and down it simultaneously. Fun right? Except, in order to get to it, you have to swim there and endure the incoming waves crashing you against the rocks yourself.

So, once again, Lauren jumped in pretty quickly and swam over toward that area. I, not knowing what was going on, decided to suck it up and jump in too. At this point, I climb through the window, stand up on the side and see Lauren 3/4 of the way in, turned around looking back my way. So I jump in.

Immediately I start swimming for where I last saw her, but am being diverted slightly toward the ropes. Looking around, I cannot see her and start to think she must have already climbed up. This is about the time where I’m not quite making it to the ropes, and am trying to grab one of the outlying harnesses and am getting slammed by wave after wave, one of which finally throws me against the wall. Luckily, using my arms and catching the rock under my feet I was able to stay above water and fend off the oncoming rocky doom.

This certainly wasn’t going to work. So I decided to retreat and replan my attack. So I waited a moment for the water to retreat before the next wave can in and used that to get myself further out into the water again.

Back out a ways, I look around again and still no sign of Lauren. She must have already scaled those ropes and be waiting for me up top, was all I could think. Not wanting to have her worry, I decided to go back at it again. This tome I approached at a wider angle, so the current would drag me where I needed to go, as opposed to fighting it closer in. And it worked, yay strategy!

So there I was, clutching the bottom of the ropes, trying to get a foothold, while those same waves were crashing in. This time though, there were people climbing down in every direction and I couldn’t find a way to get passed them. After a few minutes of trying to figure out how this was going to work, I started to give up and pushed myself back out into the water, time to swim back to the boat.

Once again though, I started imagining Lauren at the top wondering where I was, so after a minute I decided no more excuses. Time to climb. So I went back in. This time there were just as many people climbing down, but I just decided they were going to have to go around me, just as much as I had to go around them. Everyone else made it up somehow, right?

One thing I can say about climbing these types of ropes in bare feet is that it hurts.

Finally I made it to the top of the structure, Somewhat expecting Lauren to be waiting at the top, I instead found a huge line of people, waiting to climb down, so I made my way past all of them, down inwards, expecting to see her waiting for me. Instead, she was no where to be found. So I searched, had she gone around through this place, along with everyone else? Why hadn’t she waited for me? Maybe she thought I turned back? So, I went through the area, toward The Beach. Ton of people swimming, but no Lauren.

Now I was starting to panic.

Had she been pulled under in that current? Had no one noticed? Maybe she just turned back for the boat I hadn’t noticed.

So I started making my way back, only to have to stand in that line. So I stood, and waited. For 45 minutes. Panicking, and imagining the worst. Turning around constantly, hoping she would come up from behind, I having just missed seeing her. Only that didn’t happen.

Finally, I reached the top of the structure, just a couple people back from being ready to climb down, and I looked out and saw what appeared to be someone on our boat, sitting where she had been sitting. Okay, panicked for nothing.

Now I just had to get down without falling into the rocks and water. Why did I climb up there again?

So, I started climbing. Held on as best I could. Tried not to think about how much the ropes hurt my feet. Took it slowly, one foot at a time and found my way to the bottom. After a moment to breathe, I pushed myself backward out into the water, spun around and started to swim my way through the current to the boat. The swim was tough, but I’m a better swimmer than I give myself credit for apparently.

I pulled myself up onto the boat and climbed into the back. Lauren looked at me and said, “I thought you were dead.” Apparently she too had gotten out there and sensed how dangerous it was. Unlike me however, she turned back near immediately, assuming I would as well. After all, as a swim coach and life guard, you never swim under these types of conditions. Glad someone told me that.

Anyway, we relayed our stories, happy the other wasn’t actually dead. Crisis averted.

At this point, we were pretty much ready to be back at our hotel. The trip was fun, but this last part sort of sucked everything out of us. However, no tour is complete with out a trip to see glow in the dark plankton, so we made one more stop, near monkey beach.

Being dark at this point, we managed to find a taxi boat fairly quickly. In fact, it was the same guy who took us back from our last evening adventure. Cool. This time, the tides weren’t anywhere near as low, so getting out was much easier and the rocks seemed much less perilous.

However, of course 15-minutes into the 30-minute ride, it started raining. Then it started blowing. Then it started to pour. Lauren was huddled against me trying to stay dry (good luck with that), while I was trying to keep this poor man’s hammock (which I assume he sleeps in) from blowing off the underside of the roof, as it had come disconnected.

Of course, I have a feeling this sort of trip is second hand for these guys, as he just pushed through and got us home.

The last long boat of the trip (or so we thought). 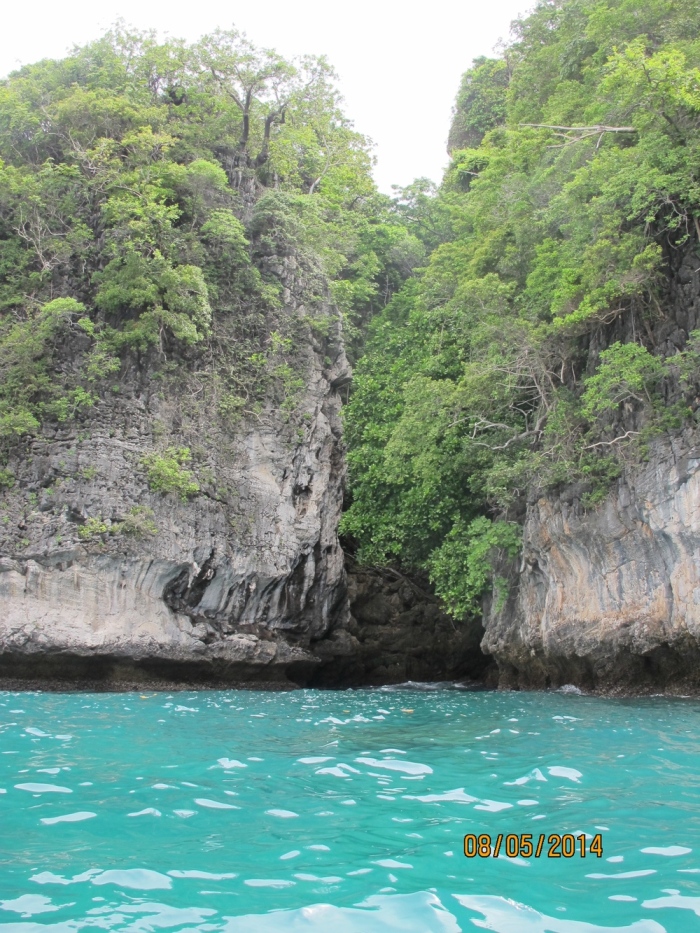 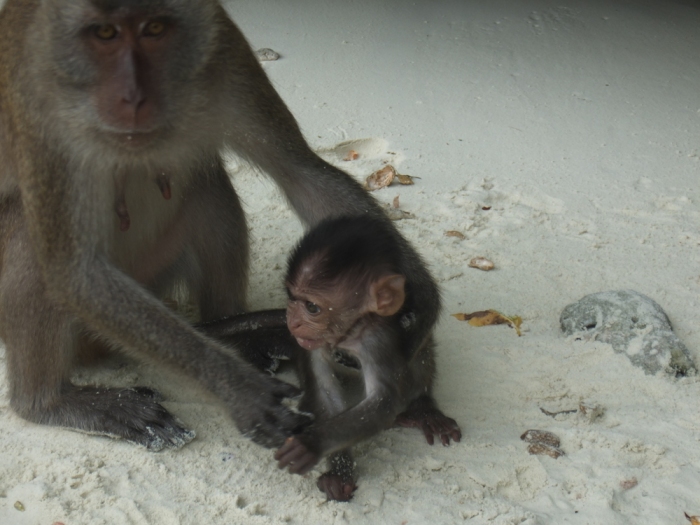 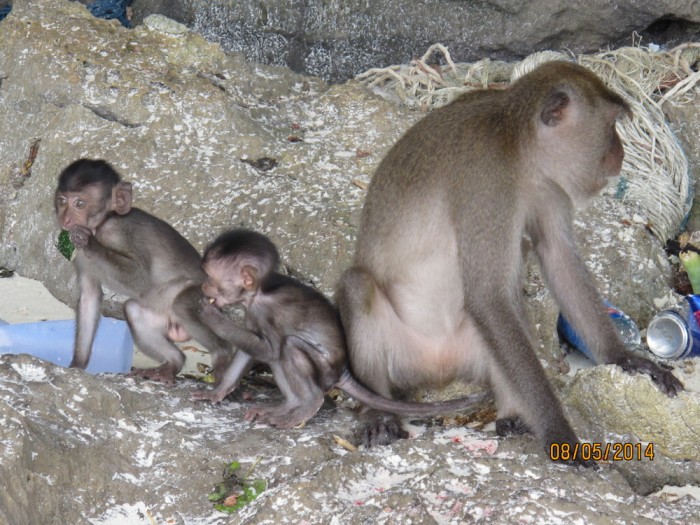 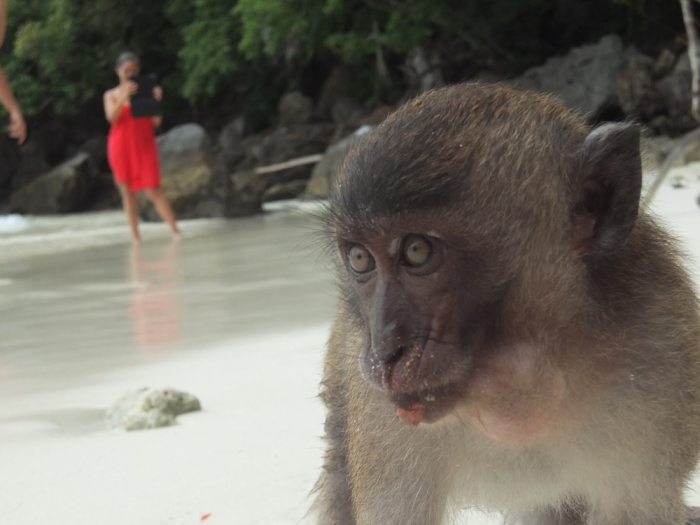 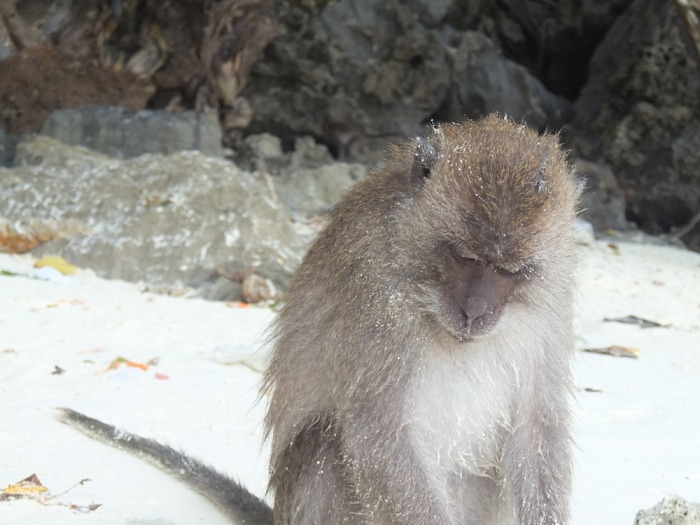 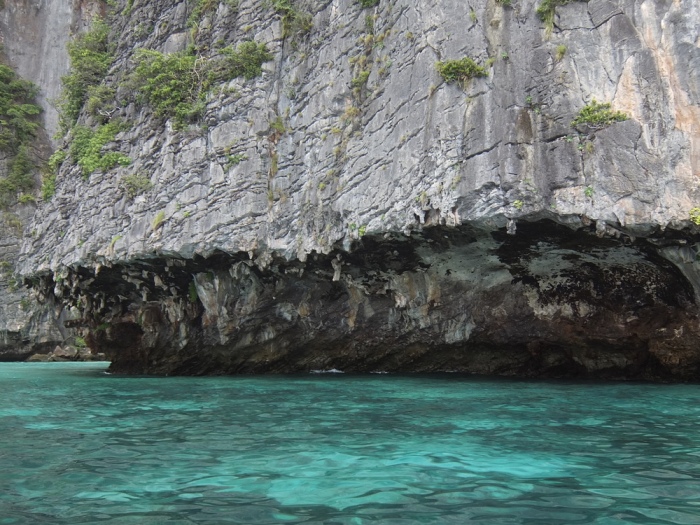 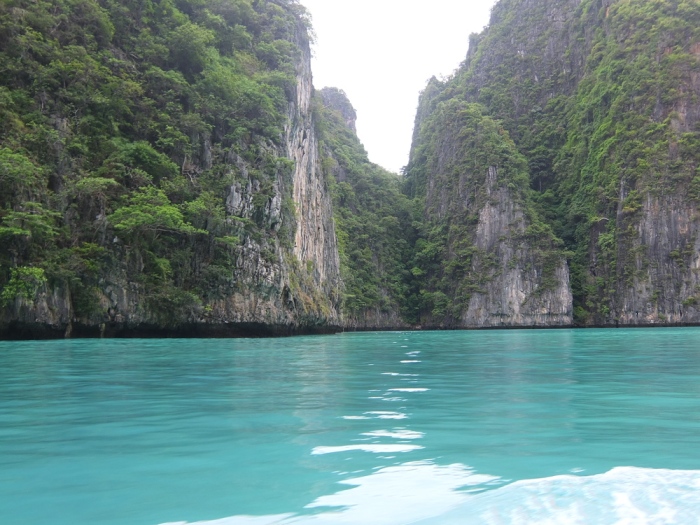 Drew Butler I'm a father and web developer who is currently traveling the world with my family and seeking new adventures. In the wee hours, I'm also working on developing new things.
Published August 6, 2014July 10, 2015

One thought on “Day 10: A Tour To Remember (or the day we thought we died)”